Cosplayers went all out this year at the 2017 Dragon Con parade down Peachtree Street. From superheroes to handmaids to a surprising amount of inflatable Tyrannosaurus rex suits, people came out in droves to show off costumes they’ve been working on, sometimes for months ahead of the convention.

This year’s convention, set for Friday through Monday of Labor Day weekend, has hosted a number of notable guests among the projected crowd of 82,000, according to Dragon Con media relations.

Actors such as much of the cast of television shows “Doctor Who” and “Star Trek: The Next Generation” were signing autographs at the Walk of Fame Saturday. Comic book writer Stan Lee even made an appearance at the parade.

After the parade ended, convention goers took off to different corners of the Hyatt Regency and other host hotels to watch panels, buy merchandise, play games or just show off their cosplay. In the gaming section of the convention, friends or strangers met around tables to play a wide variety of tabletop games. Across the hall, people were dancing along with “Dance Dance Revolution” machines, playing fighting games or sampling Virtual Reality technology at the computer gaming area.

Meanwhile, as attendees wrestled their way through the streets of Downtown Atlanta, some stopped to get a glimpse or take a photo with some of their favorite cosplayers. 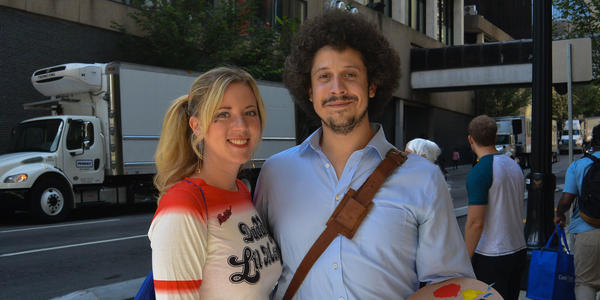 Five-year attendee Julie Bogle from Tampa brought William Blanchard with her. It was his first time attending, he said, but he used his naturally curly hair to build a cosplay of painter Bob Ross.

“I’ve made friends I didn’t know before that I get to see whenever I come here,” Bogle said. “It’s an excuse to dress up and people don’t care.”