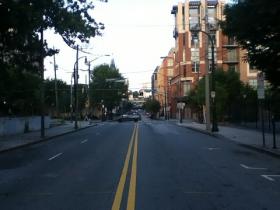 The sounds of drums and horns filled Sweet Auburn.

Stephanie McNair and her 8 year old son Charles came to the parade for a reason.

“It means a lot just to have this right in our backyard and available to him. We’re going down to the Apex Museum afterwards, so we’re gonna make it a whole day of African American history. Just a better understanding of where he came from, where his mommy came from, and some of the things we’ve had to deal with in the past”.

The parade marched down Auburn Avenue, but had to be diverted due to railway construction for the Atlanta Streetcar. Things became confused when traffic on the Jesse Hill Jr. drive cross street didn’t get blocked off. The groups and bands had to march past cars that got stuck in the parade. The festivities continued on with a festival at the end on Auburn Avenue.