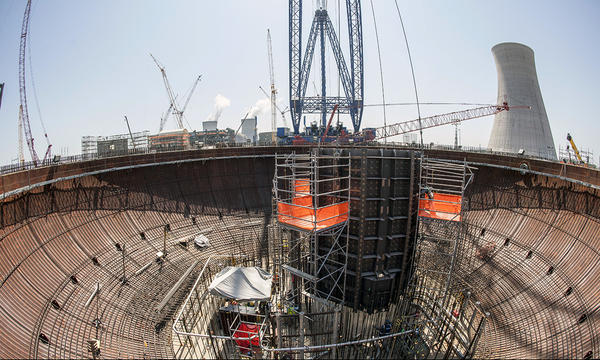 Activists are asking Georgia’s energy regulators to reconsider building new nuclear power units at Plant Vogtle. The plant expansion is expected to be complete in 2020 – three years behind schedule.

Georgia Power has to go to the Public Service Commission every six months to get its expenses for construction at Vogtle approved. Right now, the last half of 2014 is under consideration. The PSC holds hearings to find out what’s going on at the plant, then lets Georgia Power pay its contractors.

Outside groups also get to weigh in. On Tuesday, Glenn Carroll, a coordinator for Nuclear Watch South, asked the PSC to consider stopping the process entirely.

“We think the public deserves to know what it would cost to cancel Plant Vogtle and compare that to the $12 billion we have left to spend,” she said.

That’s not a number that the PSC has investigated.

“Every economic evaluation since certification has shown that you move ahead with the project,” said Steven Roetger, a PSC employee. “If the benefits are significantly better than the next best alternative, then why would you want to know that information?”

Georgia Power can choose to respond at a hearing in July. The PSC will make its decision on the six months of spending in August.