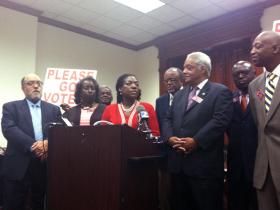 “Can you tell us where we are in the whole scheme of things and why haven’t they been processed?”

Deputy Secretary of State Tim Fleming said counties and not the secretary of state’s office are in charge of processing applications. And he said many of the 51,000 are in the system.

“Through our spot checks over half of the people that we’ve spot checked are somewhere in the system, whether they’re already active registered voters or they are in the pending status.”

Officials with the office say during an election year a large number of voters sign up and it’s not unusual for counties to be several days behind in processing applications. They also encouraged members of the Georgia Legislative Black Caucus to contact individual counties to check on the status of applications turned in by the voter registration group. 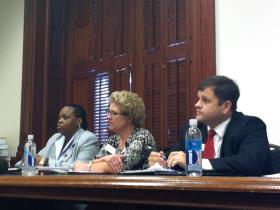 However, officials with the office said they were unable provide specifics about how many of the 51,000 have been processed. They also did not say which counties are behind. As a result, Dawkins-Haigler said she plans to contact the U.S. Justice Department.

“We’re not going to let anyone hide behind the shade of night, or behind a title or position, because we’re going to make sure everyone in the state of Georgia who wants to vote, who registered to vote, has the opportunity to vote in the November general election.”

General Counsel for the secretary of state’s office, Ryan Germany, also gave an update about the applications turned in by the new Georgia Project that are under investigation.

“What we’ve found so far is troubling. We have found 30 confirmed forgeries out of the 72 that have been investigated that have been brought to us through the counties,” said Germany.

“Republicans are behind in demographics, they’re losing the demographic war. I hope they don’t think the only way they can win is by suppressing votes. That’s my fear. That’s my concern,” said Fort.

Kemp has said the investigation is not an attempt to suppress the votes of minorities or Democrats. Last week, he said it’s the duty of his office to look into every instance of voter fraud.

The New Georgia Project has been subpoenaed and has until Friday to turn in documents related to the investigation.