The bill the Atlanta City Council unanimously approved Monday keeps the private company enforcing the city’s parking laws from being too aggressive. 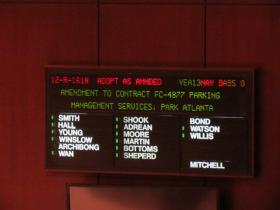 Since Park Atlanta started enforcing the city’s parking laws in 2010, drivers, business owners and others complained the private company was too strict. At the same time, many said the city and Park Atlanta did a bad job of telling people what the laws are.

After the city council tried more than once to fix the problem, the Mayor’s office and Park Atlanta hammered out a solution. City Councilman H. Lamar Willis…

“What we essentially did was went back and made some improvements to make sure that you didn’t have over aggressive enforcement,” said Willis. “If there were broken meters, signs were not properly placed or had been removed, this legislation called for those things to be fixed within 48 hours.”

Before passing the bill, the Council approved an amendment from Councilwoman Felicia Moore. The amendment tells Park Atlanta it can only enforce laws stated on corrected parking signs.