In his 2013 State of the State address, Governor Nathan Deal said Georgia is heading in the right direction, but must be careful about its priorities amid stubbornly high unemployment and tepid revenue growth. 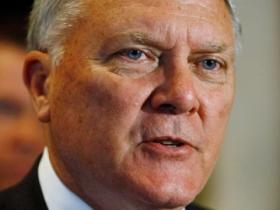 Before a joint session of the General Assembly, Governor Deal touted last year’s criminal justice reforms and called for a new legislative package that includes a similar community-based approach for youth offenders.

“The cost of each bed in a youth detention center is in excess of $91,000 each year. It is certainly an area where less costly options must be used,” said Deal.

This year, the governor’s office has directed nearly all state agencies to cut their budgets by three percent. However, Deal wants increased funding for the HOPE scholarship and the state pre-K program.

“I have added 10 days to the pre-K school year thereby restoring it to a full 180 days and increasing the salaries of those deserving teachers,” said Deal.

“There are those in the media and elsewhere who thrive on sowing the seeds of doubt and distrust.”

After censuring (and fining) one of its most powerful members this summer for disclosure violations, the Senate has taken steps to limit lobbyist gift-giving, but the House Speaker has said he wants to go further with a complete ban.

Meanwhile, the governor continued his push to extend a controversial fee that helps shore up the state Medicaid program. He said lack of legislative action would jeopardize hospitals across the state.