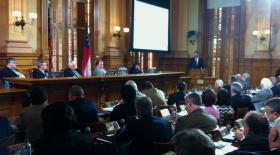 Members from the House and Senate appropriations committees met Tuesday to begin the process of finalizing the state budget.

Governor Nathan Deal was on hand to summarize his recommendations, which assume slow steady growth heading into 2014.

Deal emphasized many of the same points he touched on during last week’s State of the State address.

Three percent cuts across the board, and slightly more funding for the state pre-K program, the HOPE scholarship, and juvenile justice reform.

He also continued his push to renew a hospital tax aimed at shoring up the state Medicaid program.

“I think it is critical,” said Deal. “We cannot afford to have a $700 million hole in our Medicaid budget.”

If the revenue projection holds true, Georgia in 2014 would be back to where it was at its 2007 peak, before the recession.

House Appropriations Chair Terry England said the numbers are reason for optimism, but warned the state isn’t out of the woods yet.

“The problem with that is we’re a larger state than we were in 2007 so there’s more people needing more services and resources, so even though you have that growth, the demand is still greater than it was in 2007.”

Accordingly, the 2014 budget includes increased funding for education and healthcare, but most of it would be used to simply keep up with population growth.

“In years where you’re spending a lot of new money, there might be more needs and more wants than there are dollars, but we have such a lean budget to begin with, I don’t know what we’d have to fight over.”

Following Deal’s remarks, State Economist Ken Heaghney forecasted a slow recovery into 2017. He said housing appears to have turned a corner, fueled mostly by large outside investors. In the future, he wants to see more individual homebuyers.

“Obviously what we need is job growth [and] income growth so that we get people out of their parent’s basement, renting houses, people starting to buy, and start that virtuous cycle of home buying,” said Heaghney.

Georgia is constitutionally required to pass a balance budget each year. Joint hearings will go on throughout the week. Traditionally, the budget is passed by March or April.