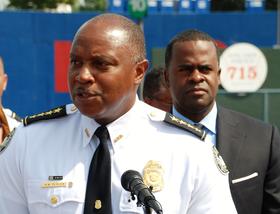 The Atlanta Police Department rolled out 70 new 2014 Ford Interceptors Thursday, and the new cars will come with some big technology upgrades for the department.As heard on the radio.

The new cars are equipped with high-definition dashboard and rear-seat cameras, as well as video and audio recording equipment, that can all be uploaded automatically by supervisors. GPS systems also allow supervisors to track each car’s location and speed in real time.

Police Chief George Turner said until recently the department was behind on law enforcement technology.

“The last thing we wanted to do was to continue to fall further back,” Turner said. “I believe today we are much further on the list and we probably are the state of the art and the leader in terms of technology in vehicles.”

APD has been accused of police brutality and misconduct in the past, and cell phone videos recorded by bystanders have put the department in legal troubles. In 2011 a bystander videotaped an officer yelling obscenities while repeatedly kicking a man, which ultimately led to the officer’s firing. Last year the department opened up an investigation into excessive use of force after a bystander captured a cell phone video of police using batons and pepper spray when responding to a domestic violence call.

The cameras are activated by triggers the department built into the system – like turning on the blue lights or hard stops – though officers can turn on the cameras manually.

The new cars cost nearly 3 million dollars – and they will start to roll out this month in Southeast and Southwest Atlanta. The department’s car fleet currently sits at 300, and Turner said the department plans to gradually replace the remaining 230 Crown Victorias. Turner said the 2014 city budget includes funds to purchase another 70 cars in the coming year.