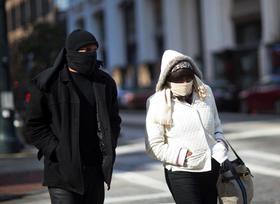 Forecasters say they’re expecting a round of frigid winter weather to move into the region later this week.

Daniel Streeter, who lives in Vinings says he’s not worried. He’s from New Jersey, and he says the weather now is like springtime there.

“We used to walk to school in that, so that’s nothing for us,” he said.

But it’s supposed to get colder. The National Weather Service says it’s expecting wind gusts Thursday morning that could cause wind chills in Georgia to plummet to the single digits. Meteorologists say Thursday’s high temperatures could be below freezing in several areas.

“When it gets to be minus-10, then I’ll worry,” said Jay Brooks of Ansley Park. “It may harm the camellia buds, that’s my biggest concern.”

Forecasters say Georgians should make plans to protect their pets, plants and pipes.

The cold weather moving into the region isn’t expected to include rain, snow and other forms of precipitation.

The winter that never quite made it to much of the United States in December is arriving now.

From Seattle to New York and Chicago to Atlanta, typical winter weather started showing up over the weekend.

The National Weather Service says temperatures will be well below normal in the eastern two-thirds of the country and Chicago could see six inches of snow.

But the weather service doesn’t want to go anywhere near what was one of last year’s most popular phrases in America last year: Polar Vortex, an unusually frigid pocket of air that sits over the Northern Hemisphere during the winter and sometimes reaches as far as the United States. That’s mainly because what is happening this year is far less dramatic than what occurred last year and is pretty typical winter weather.