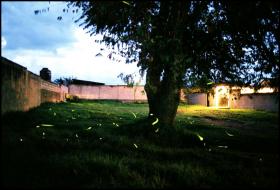 It’s one of the first visual cues that summer is on its way: a certain insect appears at dusk, emitting flashes of light as it buzzes around just above the grass.

But the familiar firefly, or–as some call it–the lightning bug, may actually be disappearing. And a group of researchers at Clemson University in South Carolina are trying to understand how and why.

To tackle the question, they launched the “Vanishing Firefly Project“ earlier this summer. But Instead of limiting the scientific work to professional researchers, the group turned to the general public to help collect data. They asked “citizen scientists” here in the U.S. and abroad to count the fireflies around them and submit their findings through a mobile app.

Since the initial launch in May, all results have been added automatically and in real-time to an online census map.

City Cafe host John Lemley talked with professor David White about their findings and their plans for the project next year.