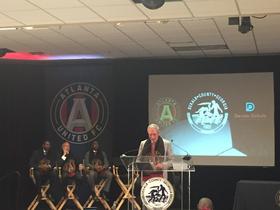 It’s official. A major league soccer complex will soon be built in DeKalb County on Memorial Drive near Interstate 285. On Tuesday, the DeKalb County Commission approved a $30 million practice facility and headquarters for Atlanta United FC.

Jason Longshore was one of those who showed up in support. He serves as chief development officer for Soccer in the Streets, a soccer organization for disadvantaged youth.

“To be able to have them see a professional team train just a couple miles down the road in their community is a huge motivator for us and a way to keep the kids on the right path,” says Longshore.

Interim DeKalb CEO Lee May says the complex will help revitalize the area and lead to what he envisions as a downtown DeKalb.

“This is one of the biggest economic development projects this area has seen in DeKalb County in quite some time,” says May.

The county plans to provide the team with land to build the complex. County officials estimate it could spend as much as $12 million over three years to clear the property and to pay the team to use office space in the stadium.

But Commissioner Nancy Jester says the project is not a good use of public money.

“I just don’t think you can afford to put taxpayer dollars at risk on a hope,” says Jester of the economic development that the county hopes will accompany the building of the soccer complex.

Team owner Arthur Blank says he chose DeKalb because of location, the enthusiasm of county officials and the amount of youth soccer in the area.

The complex is expected to be finished by the end of next year. Atlanta United is expected to start playing games in 2017 in a stadium the team will share with the Atlanta Falcons.