This session, AALAC is focusing on the three issues most important to its constituents: public education, economic equity, and health care access. Regarding education, executive director Helen Kim Ho said AALAC is backing two bills that crack down on cyberbullying.
“Asian teens are not only the most bullied in the classroom, but they are the most frequently cyberbullied of all teens, according to the Department of Education,” she said. “And unfortunately in Georgia, our laws currently do not protect children from the most common forms of cyberbullying.” 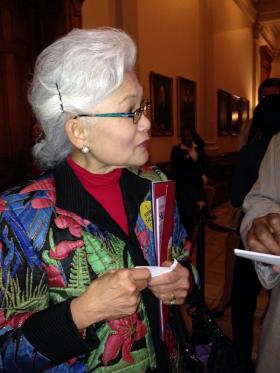 AALAC is also supporting the Family Care Act, which would allow workers to use earned sick days to care for a child, spouse, or elderly parent. The bill also has the support of the Georgia chapter of the 9to5 Organization. Chapter president Charmaine Davis said the measure will be easier on families and businesses.
“This means that if you’re a working mother, your child wakes up sick, you can call your employer, and be honest, completely transparent with your employer and say, ‘I need to use the sick day I’ve earned to care for my child,’ “ Davis said.
AALAC also wants to delay or repeal the required E-verify, a federal system used to verify workers’ legal status. The group also supports expanding Medicaid in Georgia, under the Affordable Care Act.
Monday’s event was held at the Georgia Freight Depot in Downtown Atlanta. Afterwards, several members of the group swung into action. They walked across the street to the State Capitol to lobby their representatives. Le Dan Doan said she met her representative Dewey McClain (D-Lawrenceville).
“The issue that I want to lobby for is the cyberbullying,” Doan said. “We want a tougher law in the state, because I have tenth grade students. With all that Internet stuff, you know, it scares me. I have to monitor them every day.”
Doan said McClain seemed receptive to the legislation, but she says, she’ll have to see how he votes.
The breakfast drew lawmakers from both parties, including Republican Gov. Nathan Deal, Georgia Democratic House Minority Leader Stacey Abrams, Republican U.S. Rep. Rob Woodall, and Democratic U.S. Rep. Hank Johnson.