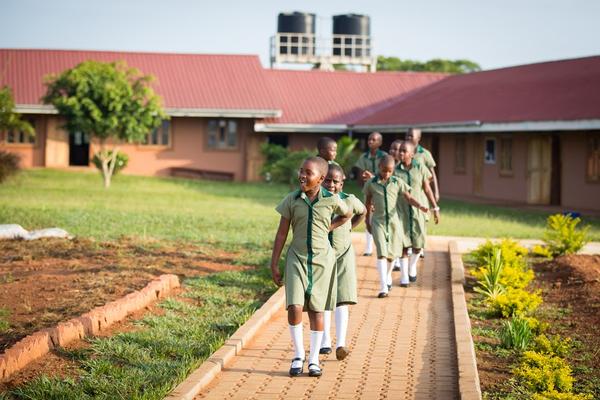 In the 1980s, television stations, magazines and newspapers were covered with  images of African children with distended bellies and flies covering their faces. This was the time of Live Aid and Michael Jackson’s “We Are the World,” – large-scale recordings and concerts to send money to the poor and starving in Africa.

There was also a civil war going on in Uganda, but, when human aid worker Ray Barnett went to the country, he didn’t see the despair of the television infomercials. Instead, he saw kids full of hope and potential. He founded the African Children’s Choir in 1984 to help orphaned kids finance their educations through song and dance.

Today, the choir extends beyond Uganda. There are different branches and support systems in Rwanda, Nigeria, South African, South Sudan, Kenya and Ghana. Children from ages seven to 12 are selected to sing and tour for a year, and that money goes back to schooling specifically for them.

Producer Erin Bernhardt first encountered the choir in 2007 and was amazed by what they were able to do. The choir had been approached by multiple filmmakers to make films about the choir, but they were always turned down. Bernhardt, however, convinced them otherwise and set out on a very difficult journey to make “Imba Means Sing.”

Danielle Bernstein joined “Imba” as the director and editor after a series of crew changeovers.

Bernhardt and Bernstein came into the WABE studios to talk about the making of the film:

“Imba Means Sing”​ has been admitted to several film festivals across the country, but it will premiere right here in Atlanta as part of the Atlanta Film Festival on Tuesday, March 24 at the Rialto Theatre.

The filmmakers plan to do additional screenings around the city to educate the public about the choir, to spread the idea of “education as a human right,” and to promote music education in schools.