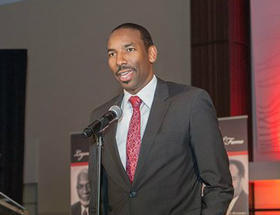 New legislation under consideration by the Atlanta City Council aims to increase awareness about affordable housing.

Councilman Andre Dickens is sponsoring a proposal that would add an “affordable housing impact statement” to any legislation related to land use or zoning.

“Having affordable housing makes sure our city continues to be open…a city where everyone can get a job and live and contribute,” said Dickens. “Once we’re able to articulate whether there are units that are affordable or not in any given project then knowing requires us to do something.”

A recent report commissioned by the city of Atlanta shows roughly 38,000 renter households are considered “cost-burdened,” meaning more than 30 percent of their income goes to rent.

Matthew Cardinale, who heads the website Atlanta Progressive News, worked with Dickens to draft the legislation as part of a law school research project (pdf). Cardinale says too many Atlantans are being priced-out of neighborhoods.

“New units are coming in at exorbitant prices that are far out of reach for working people. We as a city have to get creative and smarter about how to address the problem,” said Cardinale.

Austin and San Diego have a similar requirement already in place. Cardinale said his research showed the statement has a subtle, but important effect.

“It seems to nudge developers and other stakeholders in a direction of coming up with proposals that are better in terms of offering more meaningful affordable housing,” said Cardinale. “Hopefully that can happen in Atlanta.”

Both Dickens and Cardinale see the proposal as a first step towards more significant legislative action, such as requiring a certain percentage of every new development include affordable housing.

The impact statement legislation is currently in the council’s Community Development and Human Resources Committee. Dickens chairs the committee and is optimistic his colleagues will support the idea. From there, he hopes to get a vote by the full council early next year.