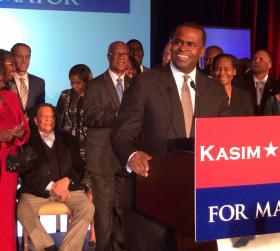 Speaking at a downtown Hyatt before several hundred supporters, Reed said he was humbled and honored.

“Tonight we won every precinct, every neighborhood, every quadrant of the city of Atlanta,” said Reed.

He touted the accomplishments of his first term, including adding 700 police officers, balancing the budget every year without raising property taxes, and overhauling the city’s pension system.

“It’s undeniable that we are a stronger, more prosperous city than we were four years ago today,” said Reed.

He thanked his city and campaign staff, as well as his mentor, former mayor Andrew Young, who spoke at the event earlier. Reed then switched focus to his second term.

He’ll take those next steps with many of the city council members from his first term. However, two allies of his were upset – H. Lamar Willis and Aaron Watson.