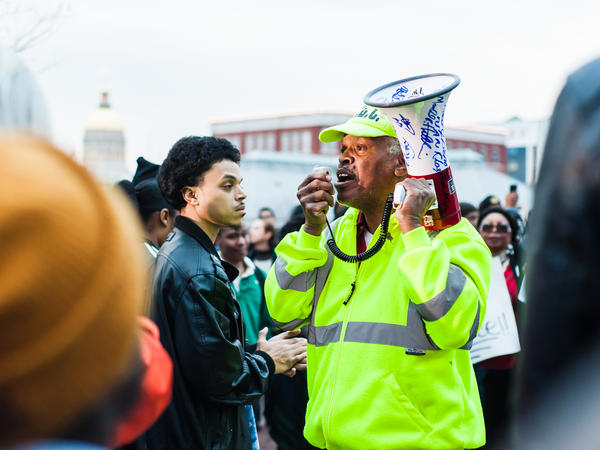 Note: Story updated to include response from City of Atlanta

It’s been more than five years since Felicia Anderson saw Atlanta Police beating a handcuffed suspect, grabbed her cell phone and started taking pictures of the scene from her front porch.

Anderson sued the city and won.An audio version of this story

In addition to a $50,000 cash settlement, a federal court also required that the Atlanta Police Department change its policy to forbid officers from interfering with someone taking pictures or video.

But according to a lawsuit filed in federal court Tuesday, Atlanta Police are not following the order.

Grossman says he was prompted to follow up with the city after learning of several journalists’ arrests during local protests related to unrest in Ferguson, Missouri. Atlanta Police officers allegedly told reporters and photojournalists they couldn’t record what was happening.

Grossman says based on that night’s events, he asked the Atlanta Police Department if it had changed its procedures to reflect the court order.

“They provided documents which show that, in fact, they have not complied with the court order,” he says.

Documents filed as part of the lawsuit show attorneys offered to help the city of Atlanta come into compliance as recent as last December. If city officials agreed, the document shows, attorneys agreed not to pursue contempt charges.

According to the federal complaint filed Tuesday, the city of Atlanta did not respond.

The lawsuit asks a judge to fine the city at least $10,000 a day until the Atlanta Police Department complies with the mandate.

The City disagrees with Plaintiff’s Motion for Contempt Sanctions filed today in Anderson v. City of Atlanta that it failed to comply with the March 22, 2012 Consent Order.  Since April 2011, employees in the Atlanta Police Department have been specifically prohibited from interfering with a citizen’s right to record police activity by photographic, video, or audio means, as long as these activities do not physically interfere with the performance of an officer’s duties.  (A copy of the SOP as it existed in 2011 is attached).

The Consent Order in Anderson required APD to implement a policy that prohibited the intentional deleting or destruction of any recording or photograph of police activity, including use of force.  This policy change was completed by December 2014.  (A current copy of the SOP from December 2014 is attached).  The Department was required to increase the penalty for interfering with a citizen’s right to record to possible dismissal.  This policy amendment occurred in mid-May 2012. (A copy of the SOP from May 2012 is attached).

Officers were notified of their obligation to comply with each of these SOP changes.  Training was completed by the end of December 2014. Recurring training on the Anderson SOP amendments will occur in 2015 and then continue every two years thereafter.

In November 2014, two journalists were arrested for illegally impeding vehicular traffic on the Downtown Connector during the Ferguson protests.  Contrary to Plaintiff’s Motion, the journalists were not arrested for exercising their right to record police activity.  The journalists were unlawfully occupying the Downtown Connector, endangering their lives, the lives of motorists and the lives of responding APD officers.  There is no SOP, including the SOPs described in the Anderson Consent Order, that would allow any individual, journalist or not, to jeopardize highway safety.