Since the October opening of the BeltLine’s Eastside trail, it’s been a popular destination for runners, bikers and walkers. But the trail is also attracting some crime. Since mid-November there have been four robberies.

During the afternoon on November 19, a 25-year-old woman who wishes to remain anonymous was walking on the BeltLine with her friend. 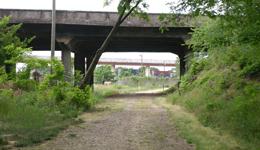 After they passed the Old Fourth Ward Skate Park the friend noticed they were being followed. The woman says they turned around near Inman Park and started walking in the opposite direction. That’s when they were robbed at gunpoint by two young men.

“It was absolutely terrifying. I’ve never been in that position before in my life, ever.”

The woman says they handed the thieves their iPhones and they quickly fled. She says it’s been about a month since the robbery, but she’s still shaken up.

“It really sticks with you, it really does. It’s unfortunate that from this I have decided to not ever go back on the BeltLine.”

But that’s exactly what police say they don’t want to see happen. Carlos Campos is a spokesman for the Atlanta Police Department.

“We’re aware of these incidents. We’re on top of it. We’re not going to let the BeltLine devolve into a place where people don’t feel safe. It’s just too valuable of an asset. We have too much invested as a city.”

Campos says police have made two arrests in connection with robberies on the trail. Because of the incidents and greater than expected use of the BeltLine, Campos says the department is stepping up patrols.

“We have officers on foot, on bicycle, and we also have a battery powered all-terrain vehicle we use on the trail.”

Atlanta BeltLine, Inc., the organization that’s overseeing the BeltLine project, also says additional and improved lighting is expected to be in place by early next year. The group is working with the Atlanta Police Department to determine appropriate places along the BeltLine for video cameras.