The question now is whether Atlantans will use the bikes. 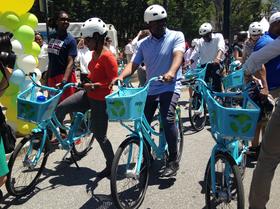 While sitting in Woodruff Park, Sheri Cody from LaGrange, Georgia, said she would rent one when she’s in town.

“When we go other places with my family on vacation we use segways, we use bicycles, so yeah,” Cody said.

Bike messenger Rashad Turner had a less enthusiastic reaction. He said the cruiser style of the rentable bikes wasn’t for him.

“My grandma used to ride something like that, you know, with the basket on the front,” he said.

Turner said he prefers road bikes. He was also put off by the $8 per hour cost.

There are $15 and $20 monthly passes available on the app, which gets Georgia State University student Eric Wittenstein excited.

“I live up in Dunwoody. So I park my car at Sandy Springs MARTA station, come down here for class,” Wittenstein said. “So a bike would be a fairly convenient way not to walk so much.”

As for Keane, he doesn’t have any doubts about Atlantans taking advantage of the bikes.

“Even cities that have struggled financially with their bike share system, it wasn’t for lack of riders,” Keane said.

At the end of the bike share launch, Mayor Reed and others did use the bikes themselves, taking them on an inaugural spin around Woodruff Park.

Relay Bike Share plans eventually to expand to intown neighborhoods with a total of 500 bikes.