Omar Zaki stands next to a sign on Woodbine Avenue on the border of the Edgewood and Kirkwood neighborhoods. 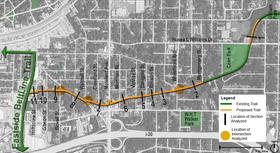 “You can see this is where it ends,” said Zaki, who’s part of the Organized Neighbors of Edgewood.

The sign marks the end of the Trolley Line Trail, a path that was built more than 20 years ago, before the Olympics. It follows the old streetcar route through Kirkwood.

It was supposed to continue into Edgewood, Zaki’s neighborhood, and then Reynoldstown, but funding issues kept that construction from happening.

Now, though, it could.

“There is potential for funding through the T-SPLOST list which will be on the ballot this November,” said Becky Katz, the Atlanta’s chief bicycle officer.

The Trolley Line Trail is one of the many projects that may get a financial boost if Atlanta voters approve the Transportation Special Purpose Local Option Sales Tax, or T-SPLOST.

Part of the revenue from the four-tenth-of-a-penny sales tax would go to expanding and improving the Atlanta BeltLine. But there is also a slice of funding that would be dedicated to smaller, neighborhood trail projects, like the Trolley Line, as well as the Blue Heron Blueway and the Lionel Hampton Trail extension.

All of these neighborhood trails could eventually be part of a network, said Ed McBrayer of the Path Foundation. The BeltLine would just be the main connecting piece.

“The BeltLine will sort of be our I-285 if you will for pedestrian bicycle traffic,” said McBrayer.

The completion of the Trolley Line Trail would mean Kirkwood and Edgewood would have a path to the Reynoldstown section of the BeltLine.

Zaki of the neighborhood group said he and other residents have been pushing for the connection for a few years. He’s also looking forward to potentially having a safe place for cyclists and pedestrians within Edgewood.

“I’d really like to be able to walk around the neighborhood a little bit more,” Zaki said.

The T-SPLOST would allow Atlanta to move forward on these projects in the next five years, the city said.

Some, like the Trolley Line Trail, also have private funding. Path Foundation, which built the original stretch, is pitching in.