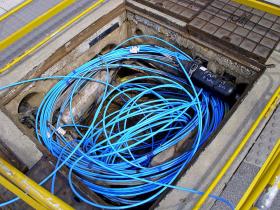 AT&T this week announced plans to offer super-fast internet service to Atlanta and three other cities in Georgia. Comcast and Google are also thinking about offering a similar service.

But does Atlanta really need it? And if so, will Atlanta’s sprawled-out geography affect the roll-out?

AT&T says Atlanta, Decatur, Sandy Springs, and Newnan will be the first to get the super-fast internet service. It allows a user to download a TV show in less than three seconds and an HD movie in about half a minute.

Fast indeed, but is it necessary?

“There is going to be greater and greater demand for bandwidth. There is no doubt about that.”

Chellappa is a professor at Emory’s business school specializing in IT management. He says right now the average consumer may stream an occasional TV show or movie, but he expects that to increase dramatically in the next several years. And right now in Atlanta, he says, there’s not much choice between providers.

“Today if you want to get really high-speed internet you pretty much have to depend on Comcast.”

AT&T, Comcast, and others all seem to now agree consumers will need more bandwidth. Comcast this summer  rolled out a pricey premium service in Atlanta which offers about half the bandwidth speed as what AT&T is planning.

In terms of competition, Comcast has a big advantage. It already has an existing network of high-speed fiber optic lines. Meanwhile, for players like Google and AT&T , laying down new cable across Atlanta’s sprawling metro area is a major endeavor.

“I wouldn’t say it makes it more difficult,“ said AT&T Georgia president Beth Sharoshi. “It does mean it may take more time to continuously have those technological solutions reach all areas.”

For now, AT&T isn’t saying when the service will actually be rolled out.