The trial for the twelve remaining educators will begin as scheduled next month.

Attorneys for Dr. Beverly Hall say the chemotherapy treatment for the former Atlanta schools superintendent is extreme and she is incapable of remaining alert for a trial. 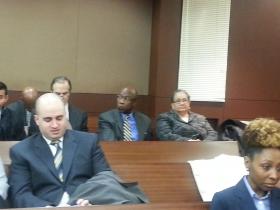 WABE’s Rose Scott reports, that’s what will be presented during a hearing .Broadcast version of this story.

In an affidavit, Dr. Hall’s oncologist, states she does not think Hall would be to assist her lawyers in preparing for trial.

Hall has stage IV breast cancer and according to Dr. Laura Weakland the chemotherapy has side effects which would make it difficult for Hall to leave her home for a six to eight hour trial day.

In addition, Weakland states Hall is under the care of a therapist, psychologist and psychiatrist and she is taking numerous medications including Xanax.

In an email exchange obtained by WABE, an attorney in the Fulton County District attorney’s office replied to Dr. Hall’s lawyer and apparently accidently to everyone else with two words, “surprise, surprise”.

The trial of Hall and twelve others is scheduled to begin August 11th on charges related to the Atlanta Public Schools cheating scandal.

The following is the complete statement regarding Lori Canfield.

“Last night, my staff received email notification asserting that the state of Beverly Hall’s health would render her unavailable for trial. Frustrated with the consequences of this potential delay, one of the assistant district attorneys wrote, “Surprise, surprise”. This response was inadvertently sent to all the parties associated with the APS indictment. She immediately recognized that this comment might be perceived by others as insensitive and attempted to recall her words.

This attorney herself is a cancer survivor currently in remission and has lost several family members to this insidious disease. She would never demean the deadly effects of cancer. She is deeply apologetic for her actions and is sorry if Beverly Hall or others may in any way be offended.

Even though this comment was made out of frustration, as District Attorney, I cannot ignore the appearance of insensitivity to Dr. Hall’s condition. Therefore, I have decided to remove this attorney from the APS trial team and will suspend her without pay for three days.

It is my hope that we can put this regrettable incident behind us and continue our task of preparing this case for final disposition.”