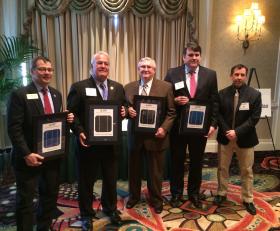 “When I first joined the commission, I had a fairly – I’ll go ahead and say it – a fairly anti-solar attitude. Now in fairness to me, the price was about three times as it is today,” said Eaton.

Still, he said he kept an open mind and solar advocates kept making their case.

“Solar in Georgia has just progressed so much in the last few years,” said Eaton.

In July, the PSC for the first time ordered Georgia Power to significantly expand its solar capacity over the next several years.  By 2017, the company will make available nearly 800 megawatts of solar, or enough to power 200,000 homes. That’s more than 10 times the amount of solar Georgia Power makes available now.

Throughout the year, Commissioners Bubba McDonald and Tim Echols have been the most vocal solar supporters. Echols said more and more Georgians are realizing the benefits.

“As people see the value in this, as more people say, ‘hey this could work in our state. It could actually have some economic benefit, bring jobs, and benefit the community,’ I think we see more people embracing this and saying, ‘well, it’s not so wacky after all,’” said Echols.

Of the five members of the PSC, only Commissioner Stan Wise was a no-show at the award ceremony.

GSEA Board Chair Mark Bell acknowledged the PSC’s stark turnaround over the last 12-18 months. He commended commissioners for their support, and said the job ahead is now convincing state lawmakers.

“We’re hoping with the endorsement of the PSC on renewables that will lead to more traction within the legislature to remove what we think are still market barriers for continued growth on solar,” said Bell.

Among the priorities, solar advocates want private companies to be able to buy and sell solar electricity, but that’s currently prohibited under state law. Georgia Power, as the state’s regulated electric provider, maintains a firm grip on solar development under Georgia’s Territorial Act.

Bell doesn’t expect much movement on that issue in the short-term, due to the upcoming 2014 election year and what’s expected to be a shorter legislative session.