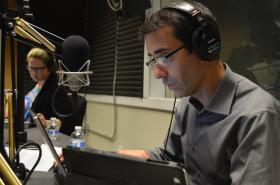 For a few days in mid-September, 2013, the crew of the BBC program Newshour visited Atlanta.  The Sept. 18 broadcast originated from the WABE studios.

During his time in Atlanta, Newshour presenter Tim Franks interviewed Governor Nathan Deal about his opposition to the Affordable Care Act, and talked to military veterans and an Iraqi refugee about possible U.S. intervention in Syria.

Tim also experienced the joys of tailgating at a Falcons game.  He talked about it all with WABE’s Denis O’Hayer.