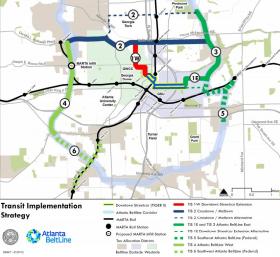 The Atlanta Streetcar is still about a year from completion, but it’s not stopping the Atlanta BeltLine from planning for expansion.

The BeltLine’s board recently approved nearly $5 million to do environmental and design studies for a handful of new streetcar lines.

Currently, the Atlanta Streetcar is set to go from Centennial Olympic Park to the Martin Luther King Jr. memorial site.

The BeltLine will use the new funds to study extensions to Georgia Tech, the new Eastside Trail, and Piedmont Park, among other areas.

The aim is to compete for federal funds if and when those become available.

A regional transportation tax plan, commonly referred to as the T-SPLOST, would have provided about $600 million to build out the streetcar network and connect it to the BeltLine’s proposed 22-mile ring around the city.

But the ensuing T-SPLOST referendum failed. Nate Conable, the BeltLine’s director of transit and transportation, said it was a minor setback.

“We were never counting on those funds. It was a nice thing to land in our lap but we’ve always had a plan for the BeltLine,” said Conable.

He points out that although the 10-county region overwhelmingly opposed the tax plan, most city of Atlanta residents voted for it.

“I think it really confirmed for us that the Atlanta BeltLine integrated with these Atlanta Streetcar expansions is something citizens want to see for the benefits it’s going to bring to them in terms of mobility and quality of life,” said Conable.