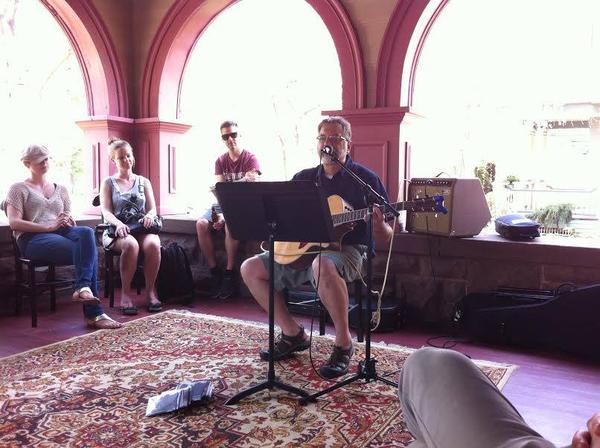 Audio version of this interview

Many local residents already know the motto. “Decatur: There’s a festival for that.” Even before it was emblazoned on T-shirts a couple of years back, it was just one of those jokes that seemed so true.

But the planners behind Oakhurst Porchfest say their festival’s a little different.

Rather than attracting waves of people from around metro Atlanta and beyond, organizer Scott Doyon says he has a simpler goal: to bring together residents of his beloved Decatur neighborhood, where he’s lived since the mid-1990s.

For four hours on Sunday, Oct. 18, more than 100 bands will take shifts playing music in yards and on porches of residential houses all over Oakhurst.

Doyon says the idea came from a friend in Ithaca, New York, a town where musicians have been crooning and plucking to local onlookers every year since 2007. Since then, the idea has gone geographically viral. Buffalo, New York; Binghamton, Vermont; Jacksonville, Florida and a number of other towns across the map host Porchfests now. Doyon’s running this one along with the Decatur Arts Alliance and Nick Cavaliere of the Decatur Metro blog.

What they envision is simple. On the afternoon of Oct. 18, the porches of Oakhurst will ring with music from bell choirs, bluegrass bands, jazz and punk outfits. But Doyon says the real idea is for neighbors to get to know one another, especially as Oakhurst continues to undergo gentrification.

“Through the ongoing transition, people sort of hold tightly to what brought them there, and as they see things change around them, it can feel threatening … We hold to what we know, and any time we see change impacting that, it’s a ‘circle the wagons’ type of thing.”

He’s witnessed a lot of wagon-circling lately, and he hopes Porchfest can help, even if only by getting neighbors to visit one another and put names to faces. Doyon says he knows a street festival won’t work miracles, but it can build community.

And that’s more important than ever as Oakhurst continues to gentrify. “Places that are connected are more able to weather adversity together and solve shared problems than communities that aren’t,” he says.

That spirit of connection is intrinsic in the design of the festival, which is grassroots rather than top-down. Once each of the 100 or so “porch hosts” is assigned a musician, the pair is on their own. During the event, Doyon and other organizers won’t be wearing walkie-talkies and fixing emergencies. Instead, “on Oct. 18, you are one one-hundredth of a festival organizer,” he says. “It’s your yard, your performance. You just manage it for an hour.”

The advantage to this hands-off approach, besides his own convenience?

“Well, the advantage is that it can be whatever you want it to be … When it comes to art, serendipity is where it’s at, and that only happens if every single participant is empowered to do what they want to do.”

What he’s most excited about are those unexpected moments of connection that freedom brings, “where something [happens] between the artist and the porch host once they hook up and have some ideas, and I’m just blown away and reminded that I love my neighborhood.”

Registration to sign up as a porch host closes Friday, Sept. 11. The event’s organizers don’t discourage people from outside Oakhurst to drop by too, but they do strongly that they make plans to bike, walk or take MARTA.