It appears House bill 707 will not pass this legislative session. But the bill’s sponsor is vowing to continue to fight and says language contained in the bill still has life.

At first, the bill was included on the list of more than 80 bills moving forward for consideration. But then Republican Senator Cecil Staton, who is retiring this year, asked the Senate rules committee to remove the bill. Several Republican members of the committee then voted 10 to 4 with Democrats not to place the bill on the list of bills that senators could vote on.

WABE was unable to speak with Senator Staton or several other Republican Senators who sided with him regarding the vote. Despite receiving unanimous passage out of a committee last week, the bill had been rumored not to be a favorite of Senate leaders. 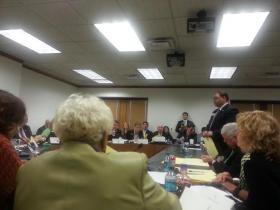 “So what you saw today was a Benedict Arnold that was loyal to King George and was a betrayal to George Washington in Cecil Staton. That’s what you saw today…I know he’s not seeking reelection, he’s outgoing, but this will be an absolute stain on his public service.”

And when asked why Staton made the motion for the bill not to move forward, Spencer said,

“I’m sure there are others pushing him to do it. He’s not seeking reelection, so he fell on the sword. You only have to surmise there are other interests and other dark forces behind him.”

Still, despite rejection from members of the Senate rules committee, Spencer says the bill could still have life.

Last week, the House added language from House bill 707 to a Senate bill, which would create a state Alzheimer’s disease registry in the state’s department of public health.

Senator Ross Tolleson was among the minority who voted for the bill to receive further consideration.

“It’s gone through the whole process, so I think it should be on the floor.”

“I don’t think it is beneficial for the state in any way.”

In the meantime, Senators will consider a bill that would place any future decisions about Medicaid expansion under the state legislature rather than the governor.

Also among the more than 80 bills Senators could approve is a bill that would legalize medical marijuana in an oil form for those with seizure disorders and another that would require drug testing for food stamp and welfare recipients.