Unlike last year, House and Senate lawmakers this year reached a deal on legislation to expand gun rights in places like bars, churches, and some government buildings.  The bill now goes to Governor Deal’s desk.

The Georgia House agreed with the Senate Version of the bill during the last hour of legislative session. That led to this announcement by Senator Bill Heath:

“Mr. President I believe that the House has finally come along in representing Georgia’s gun owners and protecting themselves.”

The bill would allow those with gun permits to carry in bars and government buildings without security. 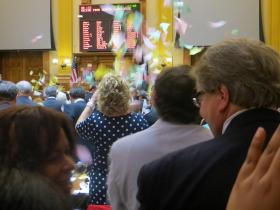 It would also give churches the right to opt-in to the law if they want to allow weapons on their property.

Supporters also say anyone with a gun permit who accidentally carries a firearm into an airport security line would have to go through security but would be able to leave the airport without getting fined or locked up. After the session was over, Senator Heath said he was glad that things ended differently this year.

“These places that are gun free zones are not truly gun free and people are at risk in those places. And this bill will allow Georgians greater opportunity to defend themselves and their family against attackers.

Heath says the bill would also allow Georgia hunters to add silencers on legal firearms, but they would have to register them in accordance with federal law.

“Suppressors only affect the sound level of guns at near range. At far range, they sound about the same both with a suppressor and without a suppressor. Good ear protection measure for hunters.”

Representative Alan Powell, who spearheaded the gun legislation in the House, was also glad.

Last year, the bill stalled on the last day of the session after facing opposition from the Board of Regents due to a provision to allow guns to be carried on college campuses.

Earlier versions of this year’s bill would have made it a misdemeanor and a $100 fine for those with gun permits to carry a gun at colleges and universities. But to reach a compromise, Powell says that language was removed.

“We had decided at this point this year to come back and get out of the campus carry business.”

The bill was opposed by many Democrats like Senator Nan Orrock. She referred to a January survey performed for the Atlanta Journal Constitution.

“70 percent of Georgians felt that we did not need to spread more guns into more places. That’s what happened. It’s disastrous, and frankly you have to ask is the Republican party listening at all to the people.”

Democrats were also concerned the bill could allow convicted felons who kill someone to use Georgia’s “stand your ground law” as justification.  Representative Alan Powell says there are attorneys on both sides who agree or disagree that’s a possibility. But he says the bottom line is that if you are a convicted felon you are not supposed to have a firearm.