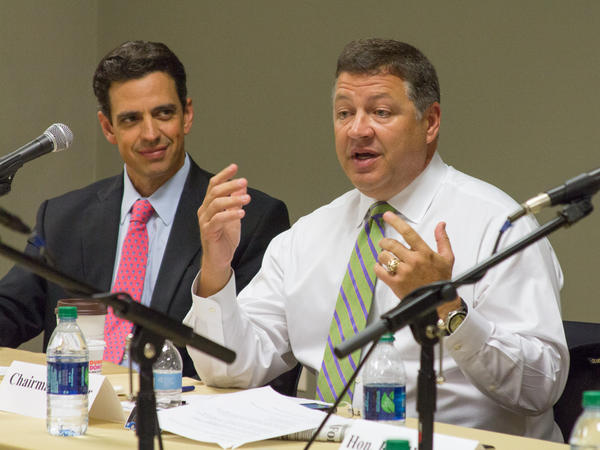 The chairman of the U.S. House Transportation Committee says raising the federal gas tax is off the table, but he’s still confident a long-term transportation bill will pass Congress this year.

Republican Congressman Bill Shuster of Pennsylvania said Tuesday that he thinks the funding idea that has the strongest chance of making it through Congress is what some senators call “repatriation.”

It’s the idea of lowering corporate tax rates in hopes that American companies would move their money out of offshore accounts and back to the U.S.

“I like any idea that can fund the transportation system that’s passable, that’s possible,” Shuster says. “Rand Paul and Barbara Boxer are opting for a [repatriation] bill. And if you got those two from completely different parts of the ideological spectrum coming together, then something’s going to happen, I believe.”

The Highway Trust Fund will run out of money at the end of July.

“The story’s out there across America. The American people understand there’s a problem and need to invest and rebuild our transportation system,” Shuster says. “In Washington, both sides of the aisle, both sides of the Capitol and both ends of Pennsylvania Avenue, everybody’s talking about a long-term bill.”

But the plan does have critics. Last summer, Thomas Barthold, chief of staff of the Joint Committee on Taxation, wrote in a letter to Sen. Orrin Hatch that repatriation could cost the federal government $95.8 billion in lost revenue over a 10-year period.

“A second repatriation holiday may be interpreted by firms as a signal that such holidays will become a regular part of the tax system thereby increasing the incentives to retain earnings overseas rather than repatriating those earnings and to locate more income and investment overseas.”