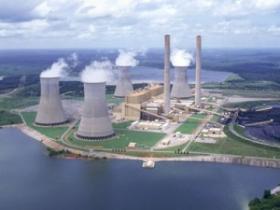 David Gardner works with the Climate Action Campaign. He says reducing carbon emissions doesn’t have to be a drain on a company’s bottom line.

“There are huge benefits both economically and environmentally,” said Gardner. “By taking a sustainable approach with energy efficiency, it generates lots of new jobs and lots of new consumer cost-savings.”

Earlier this month, the Environmental Protection Agency proposed a new carbon rule in efforts to combat climate change. If finalized as is, the new rule would force Georgia’s power plants to cut carbon emissions 44 percent by 2030.

At the meeting, local reps from Coca-Cola, Siemens, Honeywell and other companies discussed the new rule and best practices for energy savings.

The Hyatt Regency of Atlanta, which hosted the meeting, touted its own efforts.

“We’ve reduced our energy consumption 34 percent since 2000 and our water consumption by 35 percent,” said Randy Childers, Hyatt’s Senior Director of Engineering. “The bottom line is nearly $2 million a year in increased profit or reduced cost.”

“It used to be that if you had a sustainable building it was nice and cute and you were maybe saving energy and saving some money  but now your customer is demanding it. Big tenants, small tenants, the next generation of millennials – it’s just assumed you are an energy efficient building. If you’re not, you’re going to go on to the next guy.”

Robinson is leading a local initiative called the Better Buildings Challenge. It’s aimed at reducing energy and water usage in more than 100 city buildings. Launched in 2009, the initiative has so far resulted in a nearly 10 percent decrease in utility usage.

Robinson says it’s an incentive-based program that can be used as a model for statewide efforts.

“We’re essentially just tapping into the competitiveness of the real estate market. There’s no regulation. It’s a competition. Everyone wants to win,” said Robinson.

EPA expects to have the carbon rule finalized by next summer. State plans on how to comply with the new standards would be due the following year.