Three times a year in three different cities across the U.S., Coffee Fest brings together new coffee technologies, coffee classes, coffee professionals and coffee enthusiasts to bask in the glory that is coffee.

It’s the largest coffee trade show in the U.S., and this weekend, it comes Atlanta. This is the first time it’s been here in seven years.

Some of its popular attractions are the competitions: best espresso, best coffee house and best … latte art?

“Latte art” is the design atop any sort of milky espresso drink. That includes lattes, cappuccinos, macchiatos and even the new Starbucks flat white. (Though, after talking with several baristas around Atlanta, most tend to use cappuccino cups for their art. For one, it’s easier to fill up the space.)

The Specialty Coffee Association of America estimates the retail value of the U.S. coffee market at $30 billion, and specialty coffee — the coffee that would have fancy designs on top — represents half of that value.

So, for shops, latte art is business smart. Erika Lowery, director of business development at Coffee Fest, said that one reason that latte art is so popular is that it ensures a great drink. Without perfect espresso, crema and milk, you can’t do great art. And Ben Helfen, previous latte art champion, noted that if a drink looks pretty, a coffee drinker’s brain will say it tastes better, too.

Coffee Fest begins Friday. In the morning, there will be classes for coffee professionals on topics ranging from how to open a coffee shop to how to roast beans. The trade show then opens in the afternoon with booths from large businesses like Ghirardelli and also from local coffee producers. Throughout the weekend, the competitions will rage on.

For the latte art “world” championship at Coffee Fest, the 64 competitors are arranged in a March Madness-style bracket. They compete head-to-head, sudden death, with the winner advancing to the next round.

Each contestant must bring their own cup and has three minutes to pour a drink, which is actually plenty of time, according to Dancing Goats barista Robert Hayes. The judges determine the winner under five categories: the overall aesthetic beauty, the definition of the pour, the color infusion between the milk and the espresso, the degree of difficulty and creativity and the speed of the pour.

Coffee Fest has the largest cash prize of the latte art competitions in the United States. But, it’s actually not the most prestigious competition, says Ben Helfen. One reason being it happens three times a years, so there is a much higher chance of winning.

That being said, coffee professionals come from all over the country, from New York City to Los Angeles, and the world to compete. There is even a large group coming from Japan for the latte art competition.

One reason for the draw is that coffee is its own special, geeky culture. A geek-dom, as Taylor Castle at Café Benz described it. Around the world, baristas organize their own friendly competitions. Baristas peruse Instagram for international inspiration. In Atlanta, there are monthly Thursday night throw downs where baristas gather, compete and be merry.

Though a competition, competitiveness isn’t exactly at play. There are nerves at big competitions like Coffee Fest, but at the end of the day, it’s still just coffee, even to the specialty coffee baristas. 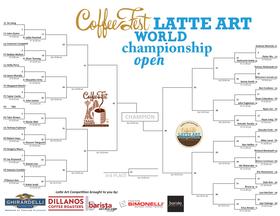