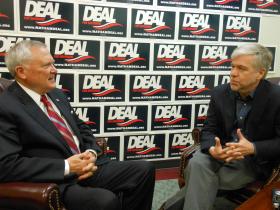 After easily defeating two Republican challengers in the party’s primary on May 20, 2014, Governor Nathan Deal turned his attention to the general election in November, when he will face the Democratic nominee, Atlanta State Senator Jason Carter.  WABE’s Denis O’Hayer sat down with both major party candidates in the days after the primary.  Here, he speaks with Governor Deal.