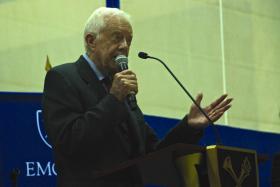 Former U.S. President Jimmy Carter Wednesday weighed in on the United States’ handling of the Ebola crisis in West Africa and the group calling itself the Islamic State during his annual question and answer session with Emory University Students.As heard on the radio

Carter praised President Barack Obama’s announcement earlier this week to ramp up aid to West Africa to help with the Ebola crisis, but he said the move should have been made “a long time ago.”

“I don’t think anybody wanted to do anything about it until the head of CDC went over there and saw how bad it was,” the former president said. “He came back home, he met with the United Nations in New York and met with President Obama in Washington and convinced them that it was almost out of control already.”

Carter said the world is just now waking up to what Liberia, Guinea and Sierra Leone – the countries hardest hit by the virus that’s so far killed nearly 2,500 people –  need to respond to the epidemic.

“But now I think they’ll get adequate support and do what should have been done in the last two months,” he said.

Carter also weighed in on the president’s response to the group calling itself the Islamic State, or ISIS, which has violently taken over parts of Iraq and Syria.

The former president said the situation is “complicated,” but overall he agrees with Obama’s decision to avoid putting boots on the ground.

“I think that what President Obama has now proposed is probably the right approach, that the United States should just limit itself to aerial support of ground troops,” he said.

Carter said he believes the U.S. can find support in Iraq to help fight ISIS on the ground, but he said there’s no one whom we can trust in Syria.

“Inside Syria, we don’t have any ground troops on whom we can depend,” he said. “There’s no other Arab country that has aligned itself with us to fight against ISIS.”

Carter said moderate forces opposed to both ISIS and Syrian President Bashar al-Assad are hard to find on the battlefield.