As questions linger about traffic issues related to the Atlanta Braves’ relocation to SunTrust Park, Cobb Commission Chairman Tim Lee said he is confident the county will be ready for opening day in 2017.

Lee, speaking on “A Closer Look,” said “we are working day and night to make sure” all preparations are completed when the Braves play their first game in the new $672 million facility being built near Cumberland Mall.

Those obligations include transportation improvements in an already-congested corridor and a proposed pedestrian bridge across Interstate 285 that has been the subject of controversy.

Lee was interviewed by “A Closer Look” hosts Rose Scott and Denis O’Hayer as part of a series on Atlanta stadiums titled “Under Construction.” 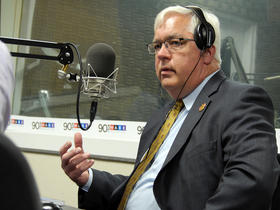 An estimated $1 billion in planned road projects in the Cumberland area was in the Cobb pipeline before the Braves announced in late 2013 that they were leaving Turner Field in downtown Atlanta.

When asked by O’Hayer if Cobb will have everything in place by opening day, Lee didn’t hesitate: “Absolutely.”

The county has committed $9 million for the bridge, which will link fans and possibly circulator buses to parking decks, and is seen as a crucial component for game-day traffic flow.

A preliminary design was approved last month and a final plan could come this fall. Lee took issue with reports the bridge won’t be ready until September 2017 and said the county is looking for “partners” in state and federal government to assist with the funding.

The stadium, which the Braves are building with nearly $400 million in public bonds, was approved 4-1 by the Cobb Commission only two weeks after it was announced in November 2013.

Lee, who was accused of a lack of transparency, apologized a year later for how he handled the deal after an ethics complaint was made against him.

In his interview with Scott and O’Hayer, however, Lee said that “if I had to do it over again I’d take the same approach. I think we did the right thing.”

Lee said it was “phenomenal” that two of Atlanta’s pro sports teams have major stadium projects underway, referring to the new Atlanta Falcons facility being built next to the Georgia Dome and that also is slated to open in 2017.

“The Atlanta region should be proud of what’s going on,” Lee said.

Scott and O’Hayer also asked Lee about other issues in Cobb government, including complaints from two commissioners that they weren’t provided with timely information on the proposed fiscal year 2016 budget before it was released to the public last week.