Picture the Chattahoochee River as an extension of the Appalachian Trail. Right now, the trail extends from Maine to north Georgia. The Trust for Public Land has been working on expanding the trail down to the Gulf of Mexico. The trust’s Georgia Director, Curt Soper, admits  outdoor enthusiasts will have to expend a little extra effort to get from the Appalachian Trail to the Chattahoochee.

“It is a bit of a distance from Springer Mountain, which is the end of the trail, to the headwaters of the Chattahoochee,” Soper says, “But for someone looking for an adventure, it wouldn’t be that much of a stretch.” 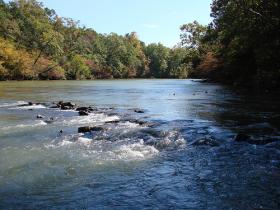 Soper says the trust and its partners have developed the land alongside the River and have worked on preserving the river itself to make it a destination for hikers, kayakers and canoers. He says they’ve conserved 17,000 acres and 76 miles of river in the last two decades.

“I could visualize a day where there would be these ‘green infrastructure’ if you will, places where people could get on the river and enjoy it stretching all the way to the Gulf,” he says, “Right now, we’ve focused on that stretch between Helen and Columbus. Down the road, we hope to extend it further south.”

Soper says it will like take another 10 to 15 years to complete the entire project.