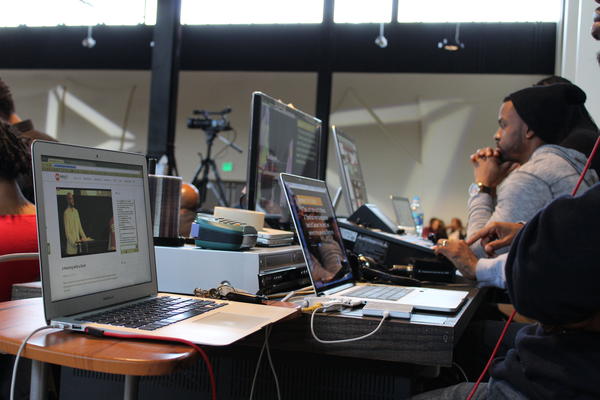 Web streaming and social media have changed the way many churches do business.

The Christian population in the U.S. reportedly is on the decline and parishioners aren’t donating as much, which means some churches are rethinking how they manage their money.

Instead of building new facilities, churches are investing more in technology.

Three giant projection screens and a row of stage lights are behind Pastor Olu Brown. He stands in front of hundreds gathered for worship on Sunday morning at Impact Church, a renovated warehouse in East Point. Brown starts reading from the Bible, but he changes the words.

“The Israelites spread this bad report on Twitter around the land,” he says, “and it blew up on Facebook.”

His translation might seem like a lame attempt to sound hip, but he has to hold the attention of people who aren’t even in the building. Hundreds are streaming the service online, and more will watch the video when it’s posted online.

Andre Barnes is the technology director at Impact Church. During services, he’s in the back of the sanctuary with his very own tech team. They create social media posts, monitor the live video stream and think up ideas for viral videos.

The team’s videos, like this spoof of a car commercial starring actor Matthew McConaughey, got national attention and caught the eye of other Atlanta churches.

“There’s a massive church here in Atlanta, and one of their video producers said they were asked to look at our church for inspiration,” Barnes says.

Clicks on the Internet can translate to donations.

“We operate, and have to operate, as a business,” says Brown, “but our bottom line is people.”

There are a lot of ways to donate to Impact Church.

“You can mail it in; you can PayPal; you can also use the kiosks. We have kiosks throughout,” says Maxine Fears, logistics director at Impact Church.

Just swipe your credit or debit card, tap the screen, and your duty’s done. You can even sign up for regular withdrawals from your checking account.

The kiosks are only some of many screens around Impact Church. There are big HD screens for people who don’t fit in the sanctuary, and there are even TVs in the restrooms.

“The pastors’ requested that we keep ESPN over the urinals,” says Elvin Hawkins, a hospitality volunteer at Impact Church. “Men need to be engaged to be in church. It tends to be mostly ladies that come to church, but we do things to engage the entire family.” 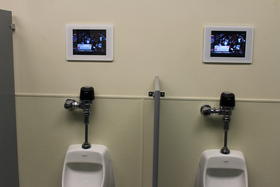 All these accommodations help get people to church and make money. But, what if you can’t be there?

Victoria Diaz lives in Massachusetts. She’s one of hundreds who regularly attends Impact Church via the live web stream.

“I want to be there,” she says via Skype after a service. “I want to participate, and I can’t, and so the next best thing was to connect online that way.”

People who stream the service can chat with others in a window right next to the video. Sometimes the stream even includes footage from a drone flying above the heads of worshippers. It makes people online feel like they’re in the sanctuary.

Impact Church is far from the first to invest so heavily in technology. For example, in 2007 the Internet TV station Life Church started holding services in the virtual Second Life world that’s home to millions of animated avatars. Life Church also has physical locations around the country. But on Sunday, many of those locations still stream sermons from Life Church founder Craig Groeschel.

“Technology can be used in multiple ways,” says David King, director of the Lake Institute for Religious Giving at Indiana University. “It can be used to allow people access to services, it keeps people in contact while they’re traveling, and it will continue to be a growth area for religious giving.”

Douglas Estes is a theology professor at South University. He says before the recession churches began investing in technology, and after the economy improved they really committed. He expects that trend to continue.

“An example would be holographic technology, where you will actually look and seem like you’re there even though you’re not there.”

Those virtual services will be yet another way to bring in real dollars.