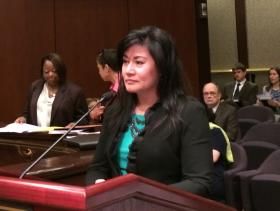 “Part of the reason we are losing good people is we can’t pay them the salaries they are getting elsewhere,” said Macrina.

Councilwoman Felicia Moore said she was unaware Macrina had such authority. She suggested vague language in the 2012 legislation had been “used and abused” and demanded Macrina produce hard evidence justifying the five-figure raises.

Macrina: “We have a long table that we used for our analysis as well as information from other utilities and…”

City code requires the full Council approve raises above 10 percent. All of the Watershed raises, which ranged from $15,000 to $25,000, passed that threshold but Council wasn’t involved.

“It was a legal action,” said Taylor-Parks. “Was it the proper timing? Was it the right judgment at the time? I think that’s in question and the answer is no.”

Friday, Reed’s office said the raises were legal because they were salary adjustments and not based on performance. At no point was the 2012 legislation mentioned.

“It’s disappointing to have a story continue to change. To hear one thing Friday and hear another thing today,” said Archibong.

Meanwhile, Human Resources Commissioner and Reed appointee Yvonne Cowser Yancy, who signed off on the pay raises in January, batted back claims Watershed is getting special treatment on salary issues over police and other departments.

The episode comes as Watershed is being investigated for mismanagement and security lapses resulting in hundreds of thousands of dollars in lost and stolen equipment.

Reed, speaking earlier in the day, dismissed calls for Macrina’s removal, saying “you have to look at the totality of someone’s performance.”

“While there have been a number of challenges in the Watershed Department, she is also the leader that helped secure the longest extension of a water and sewer consent decree in the United States of America so everybody can’t look at just what is going on right now,” said Reed.

He plans to hold off on further action until an ongoing review of the department is completed. No word yet on when that will be.