In the Atlanta area, there are more than 200,000 businesses owned by women.

Mayor Kasim Reed says there could be more. So he’s launching a program to help women start their own small businesses. It’s called the Women’s Entrepreneurship Initiative. 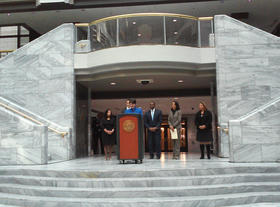 Mayor Reed says when he was running for mayor, he heard from many women entrepreneurs. And he says they had two concerns:

“One: they really didn’t feel comfortable signing a long-term commercial lease for office space and all of the financial burdens that came along with that. And two, many of the women that we encountered on the campaign trail said they did not feel comfortable having people come into their home for home-based businesses,” Reed says.

That’s why he wants to give 15 female entrepreneurs free office space at the historic Flatiron building downtown. The women would have access to loans through ACE, a nonprofit lender and get training through a new city program called the Women’s Entrepreneurship Initiative.

“Talent is equally distributed, opportunity is not,” Smith says. “And what we serve to do is democratize that opportunity for entrepreneurs and emerging business owners in the city of Atlanta.”

Applications for the 15 slots will be available next month.