Children pass out hand-drawn cards, as about a dozen veterans and their families sit with Syrian families they’ve just met and eat the feast that’s been prepared.

Veteran Garrett Cathcart, who served in Iraq and Afghanistan, helped put the event together. He said he wanted to break bread with refugee families and help show support. 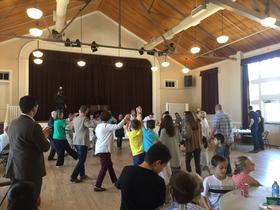 “We’re in a certain political climate, right, and it’s not the most welcoming to people around the world, and that’s some of the principles this country was founded on,” he said. “So let’s just, as a public show of  support and solidarity, let’s just have a meal together.”

The gathering was put together before the events in Syria last week. While the mood at the local event was light, the recent chemical attack in Syria and the following U.S. missile strikes on a Syrian air base loomed on some people’s minds.

Araz Mousa, who came as a refugee nearly two years ago with her family, said she was glad the U.S. launched the missile strikes last week after a chemical attack killed more than 80 people in Syria.

“I want America to help Syria. I want, because so many people died, so many kids,” she said.

Some had more conflicting feelings about the strike. Ayman Alkhoder came to the U.S. about five years ago from Syria to finish his medical degree.

“I hate when my country’s under attack, and at the same time I need someone to do something for those innocent people,” he said.

There is a feeling that people are finally paying attention to Syria, said Dr. Heval Kelli. Kelli, who’s a cardiology fellow at Emory University, came to the U.S. as a refugee from Syria more than 15 years ago and helped organize the event with Cathcart. The two met when Kelli treated Cathcart as a patient. 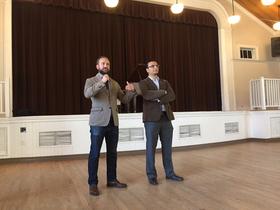 “You know, we have to be cautiously optimistic,” Kelli said. “But for today, we are celebrating bringing U.S. veterans and Syrian refugees together to build new friendships, and become new friends, and help each other out. I think that’s the most important part right now.”

Kelli said he hopes President Donald Trump has had a change of heart and will welcome Syrian refugees into the U.S. in the future.