Jackson is a 33-year veteran of the Clayton schools who retired in 2010. She rejoined the district as interim superintendent in 2012, when former superintendent Edmond Heatley abruptly left.

“This is far from what I thought retirement would look like, but it is a good place,” Jackson said after the ceremony. “It’s not unfamiliar. So I welcome the opportunity to make an impact in a different way.” 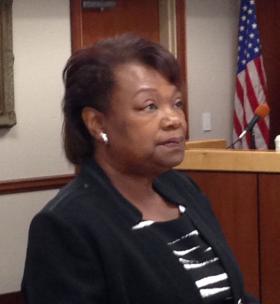 One of Jackson’s biggest challenges has been helping Clayton regain full accreditation. The district is on accredited advisement. Jackson says they’re progressing.

“We have three requirements from that district accreditation,” she said. “But, we’re in a very good place. We’re working very hard to make sure that our progress is noted and that SACS is very pleased with what we’re doing.”

Clayton lost its accreditation in 2008. It has been slowly earning it back after a leadership shakeup and mandates from its accreditor.

Still, Jackson admits there’s tension. The Clayton County school board narrowly approved her for the job in a 5-4 vote.

“I think we do have some work to do still, but we’re making progress, and that’s the key point, I think,” she said.

Jackson said accreditation is just one of her priorities. Another one, she said, is making sure teachers and students are ready for a new statewide testing series that will start next year.