CNBC says Georgia is the top U.S. state for business this year.

Georgia received the number one ranking after coming in first in the study in workforce and infrastructure. The state also ranked in the top half in all but two of the study’s ten categories. Scott Cohn is a senior correspondent with CNBC. He says Georgia went from eighth in last year’s study to first this year.The audio version of this story.

“The housing market has recovered to a great degree … jobs are returning, taxes are going down and Georgia is starting to click again.”

To conduct the study, CNBC used data gathered from government databases and other sources to examine how states faired in 10 categories. The media outlet also weighted those 10 categories based on how states collectively market themselves. Incoming Dean at Emory’s Goizueta business school, Erika James, says the ranking is significant and will help attract businesses to the state. 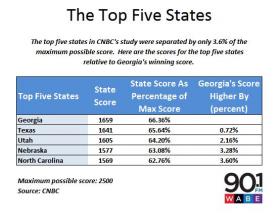 “I think it carries considerable weight. It’s a legitimate organization and has been so for quite some time. I think most executives and business leaders pay attention pretty regularly to the information and advice that’s coming out on CNBC.”

Jeff Humphries is director of economic forecasting at the University of Georgia’s Terry College of business. He also thinks the ranking sends a powerful message to companies looking to relocate or expand. He says it’s especially important because it’s not the first number one business ranking the state has received. It has not gone without scrutiny, but last November the state was named as the number one state for business by Site Selection magazine.

“If this was isolated it would perhaps be less impressive and less effective in attracting jobs and companies to the state, but the fact that others have also ranked us very high on similar metrics bodes well for the payoff from a ranking like this.”

Despite coming in number one overall, the state ranked 32nd in the areas of education and quality of life.

Wesley Tharpe with the Georgia Budget and Policy Institute says in order for more Georgians to have the benefit of economic growth, the state needs to improve access to education and educational opportunities.

“In local districts teachers have been furloughed, extracurricular activities have been cut, districts have cut school days, and in order to turn things around and have prosperity be spread to more people, we’re going to really need to double down on education and workforce investment.”

And about the ranking in general, Tharpe says, “It’s looking at a very narrow question of is Georgia a good place for large corporations and CEOs to maximize their bottom line, but it’s not asking questions like is the economy working for everyone, is prosperity broadly shared, and because it doesn’t ask those questions, I think means very little for workers and families trying to make a living in Georgia.”

Below is some more detailed information about Georgia’s ranking and score in the CNBC study. 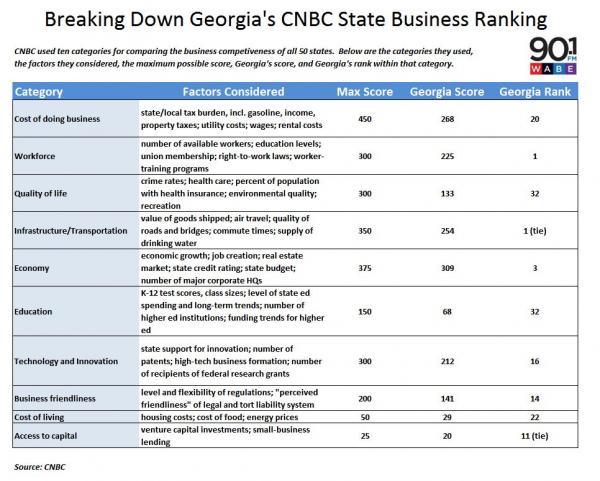