In an historic decision, the Cobb County Board of Commissioners voted on an agreement to build a new Atlanta Braves stadium and mixed use development at the northwest intersection of I-75 and I-285. The project could cost up to $672 million dollars and is supposed to be completed by opening day of 2017.

Commissioners voted 4 to 1 after hearing from residents. Business owner John Loud said revenue from the development would benefit the entire county, including the Cobb school system.

“So when we look at a way to help the education system and get teachers the raises that were discussed earlier. I think we have got this opportunity right before us.” 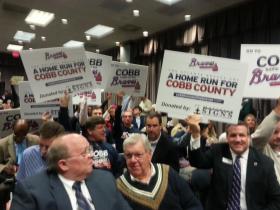 Resident Patricia Hay said she’s against the project because of the partial use of taxpayer money and because commissioners were voting on it about two weeks after it was first announced.

“We’re going to take two weeks and ram it through. It reminds me of Obama Care.”

Other residents sided with Commissioner Lisa Cupid, who wanted to delay the vote. Cupid said she’s not opposed to the Braves coming to the county, but said she didn’t have adequate time to consider the proposal. Cupid was the lone commissioner to vote against the agreement.

“I just have a very difficult time reasoning through the rush when we spend more time speaking about zoning matters that  impact a fraction, a minute fraction, of the public than what the stadium will impact.“

“It frightens me to be honest the number of threats I received. If you wanted a 5-0 vote you could have gotten it. It could have been easy, but I will not ever be bullied to sacrificing  my commitment to the people who put me in this position.”

Meanwhile, Commissioner Bob Ott, whose district will include the stadium, was among the majority of commissioners who voted yes.

“I do not think a 60 day delay. There is no more information that needs to be put out there about what we have to vote on…And one of the things I mentioned to the folks at the town hall meeting last night was that this is not just a stadium deal. This is a 60-acre development that has 15 acres of a stadium and 45 acres of a mixed use development.”

“In my view it was not ever in secrecy. It was sometimes confidential. That’s a big difference.” 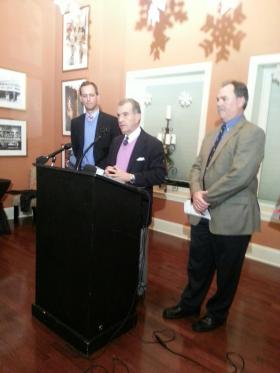 Braves Executive Vice President of Business Operations, Mike Plant, said the project had to be voted on rapidly to avoid construction delays.

“We’re moving forward quickly here. We have to.”

And Plant says the agreement is legally binding.”

Under the 30-year-agreement, the Braves up front contribution is supposed to be no less than $230 million dollars. The county portion of the project is $300 million dollars. Under the local commitment, there would be a transportation improvement contribution of $14 million. Another $10 million would come from the Cumberland Community Improvement District. The Cobb-Marietta Coliseum and Exhibit Hall Authority will issue $368 million of the 30 year revenue bonds. The Braves will cover $92 million of those bonds. Annual payments on the remaining $276 million will be paid with the county’s hotel-motel tax, reallocation of property tax revenues, a new 3 percent rental car tax, new Cumberland Special Service District Tax and a new Cumberland Special Service district hotel circulator fee.

According, to county officials, there would be no increase in property tax millage rate for Cobb County homeowners. However, taxpayer money is being reallocated for the project and will add up to more than $8.6 million dollars annually for 30 years.

Before the vote, Commissioners made several changes including capping the amount the county could spend on stadium maintenance. Commissioners still have to vote on a stadium operation agreement, transportation infrastructure agreement and bond documents.