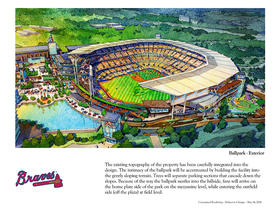 On Tuesday night, Cobb County commissioners are expected to vote on a final deal for a new Atlanta Braves stadium and adjoining mixed use development.

During the meeting, commissioners will decide whether to authorize borrowing for the project that could exceed the amount originally planned by nearly $30 million.

At tonight’s meeting, county officials will decide whether to approve the borrowing of up to $397 million dollars in revenue bonds for the project. That could stretch the county’s annual payment for the stadium as high as $25 million.

A county spokesman says that’s a worst case scenario if interest rates rise before going to the bond market. The spokesman says at today’s rates the county’s annual payment would be $22 million.

“We really are. I mean Cobb County has been a great partner with us. We’ve worked our way through some really technical issues and complicated issues together, and we’re continuing to do that.”

Residents who support the stadium say it will bring needed revenue to Cobb schools, businesses and county government. Meanwhile, opponents have raised concerns about traffic, transparency and the cost to county taxpayers.

Commissioners WABE contacted say they’re still reviewing the documents ahead of tonight’s vote or did not respond by deadline.