The Cobb County school board Wednesday accepted district superintendent Michael Hinojosa’s request to retire at the end of May. Hinojosa’s contract would’ve ended in December.Hear the audio version of this story.

The six board members present all voted to approve Hinojosa’s retirement. Afterwards, the native Texan said he’s moving back to Dallas. 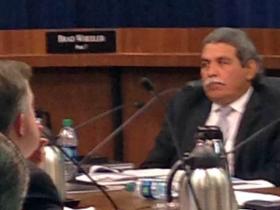 “I have three powerful moms who told me, ‘It’s time to move home,’ “ he said. “I think I better listen to them: my wife, my mother, and my mother in-law. Certainly, I’ve been a superintendent for 20 years and what helped make the decision easier is the budget is significantly improved.”

The Cobb schools faced a deficit of more than $80 million this year.  School officials say the outlook is improving for the upcoming fiscal year. Hinojosa says the district will benefit from increased tax revenues, including about $12 million dollars from new license plate fees.

With finances improving, Hinojosa says he’d like to restore all five of the district’s furlough days.

“That in and of itself will be a salary increase to all our staff members,” Hinojosa said. “And that affects everybody — bus drivers and teachers. So, that’s going to be significant.”

Hinojosa says he hopes the district will also be able to give teachers a pay raise.

Hinojosa has been with Cobb since June of 2011. School board chair Kathleen Angelucci says his departure isn’t that unusual.

“This evolves, and this happens from district to district,” she says. “Three to five years is about the going time. We know that the superintendent has elderly parents back in his hometown. I know that he’s taken another position and we wish him well.”

Ironically, Hinojosa has accepted a job with a firm that conducts superintendent and administrative searches. Angelucci says the school board is only beginning to discuss Cobb’s own superintendent search.