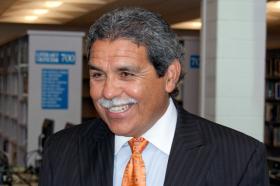 The resignation of Cobb County School Superintendent Michael Hinojosa took some school board members by surprise, but others say they saw it coming.Broadcast Version

One would have thought the headline coming out of Monday night’s Cobb school board meeting would have been parents unhappy with the school system’s response to last week’s snow storm.

But Dr. Hinojosa trumped that discussion with his announcement that he will step down effective May 31, which surprised board chair Kathleen Angelucci. “There’s no animosity. There’s been no friction between us when we worked together,” said Angelucci. “We do the business of the board, and that is what we’re supposed to do. And he never alluded that he was leaving to me.”

Hinojosa told the board he is resigning to take a job in Texas to be closer to family members, but board member David Morgan says it hasn’t all been smooth sailing for the school chief, telling WABE, “If a superintendent sees that he does not have the support of the majority of the board, then a superintendent is not going to stay. Simple as that.”

Board member David Banks says he has no problem with Hinojosa personally, but he also does not think the superintendent was a good fit. “We’re going through some hard times as far as budget and funding is concerned,” said Banks. “And I just didn’t have a sense that the enthusiasm was there and a sense of leadership.”

Hinojosa has reportedly said he made his decision months ago and that it is not related to criticism about decisions he made during the snow storm. In talking with WABE, board members had nothing but praise for the superintendent’s work during the store and that of his staff.

A district spokesman told WABE Tuesday that Dr. Hinojosa is out of town and not available for comment.