MARTA is considering bringing produce stands to stations in neighborhoods that don’t have grocery stores. 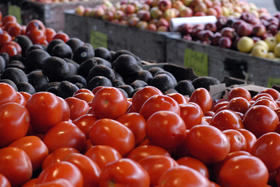 The first place MARTA is looking is the West End station.

“The stations that we have in mind are typically located in what we call food deserts,” Denise Whitfield, MARTA manager of retail development, said. “Sometimes the patrons in those areas don’t have access to fresh produce.”

The idea is to invite vendors to sell local fruits and vegetables on MARTA property in an area where you don’t need a ticket, so non-riders can shop, too. MARTA wouldn’t pay to bring them in, and the retailers wouldn’t pay to be there.

Right now MARTA is surveying riders and West End residents to see if they’d come to a produce stand, Whitfield said. She said the idea might entice more people to ride MARTA.

“If they don’t have to go to, for example, Publix when they get off work, if they could just get fresh produce when they stepped off our system, that would be a nice amenity for them,” she said.

The stand at West End could be ready to go as soon as April. MARTA’s considering other stations, too.