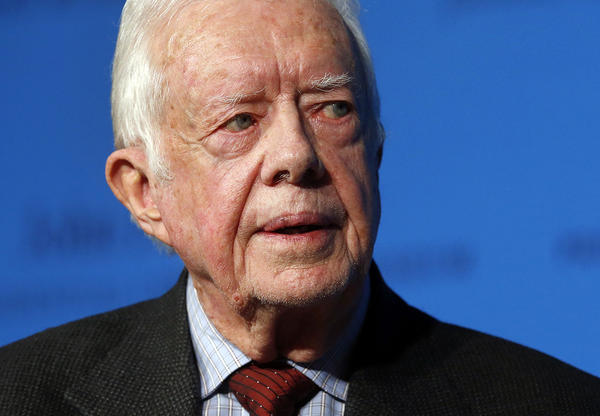 Former U.S. President Jimmy Carter recently held an unprecedented press conference to disclose his cancer diagnosis and reflect on his life’s work. Carter, who will be 91 on Oct. 1, told journalists from across the globe that he has been as blessed as anyone.

It is hard to overstate the contributions that Carter and his wife, Rosalynn, have made in Atlanta, Georgia, the nation and the world.

It’s time for Atlanta to say thank you to Jimmy Carter. Few men have had a greater impact on our world than our own President Carter.

As the 39th president of the United States, Carter is the only president to have come from Georgia. That alone would be reason to honor him.

But Carter’s life story is so much greater than the four years he served in office. Carter redefined what it means to be a former president. After leaving office, he created the Carter Center — a powerful place that has monitored democratic elections around the world, fought numerous diseases in the poorest parts of the world and promoted the cause for peace and human rights in every corner of the Earth.

As a result, Carter has helped Atlanta become a center for so many global initiatives — from Habitat for Humanity International to the elimination of some of the most devastating diseases known to mankind.

When asked what would give him the greatest satisfaction in the time he has left, Carter mentioned two initiatives that he has worked on for decades: peace in Israel — not that he holds out much hope on that one — and the eradication of the Guinea worm.

When the Carter Center first started its fight against Guinea worm disease more than 20 years ago, there were 3.6 million cases. Today, there are 11.

“I want the last Guinea worm to die before I do,” Carter said with a smile.

It was during the press briefing when I thought of all the ways Carter has made a difference in the lives of so many people, beginning with us in Atlanta and Georgia.

He helped put us on a global stage by fighting for causes that will make the world safer, healthier and more equitable for women, minorities and the poor.

Where Atlanta and Georgia would be without Jimmy Carter?

All too often, we forget to say thank you to important people in our lives while they are still with us. Did we ever give a proper thank you to civil rights leader Julian Bond before he left us?

Let’s not lose this window of opportunity to properly thank Jimmy Carter. We should put on a grand bipartisan celebration where we can simply say:

Thank you, Jimmy Carter. Thank you for a life well lived.