Last year, more than half a million veterans sought help for Post Traumatic Stress Disorder from the VA.  The military estimates at least 20% of Iraq and Afghanistan veterans suffer some form of PTSD. Which is why a group of acupuncturists here in Atlanta have set up a free clinic for military personnel and their families. 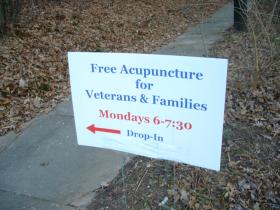 In a small, upstairs reading room at the Episcopal Church of the Epiphany in Decatur, soothing music sets a tone of peace and quiet. 39-year old Robert Bradley has been here once before so he knew the drill: come in, take a seat on a chair or the sofa, and relax.

Very few words are spoken as the acupuncturist unwraps sterile needles and strategically places them in Bradley’s ears. He checks to make sure they are not falling out.

Bradley served six tours in Iraq and four in Afghanistan. He came here looking for something other than drugs or alcohol to help with his insomnia, nightmares, anger and chronic pain, all symptoms of PTSD.

“I don’t even like taking aspirin,” says Bradley. “And it seems like every medication they want to give you for PTSD, or anything, is an anti-depressant, and I’m not depressed. So I don’t want to put anything in my body that I don’t need. so I’m looking for alternative medicine and i heard about this figured I’d give it a try.” 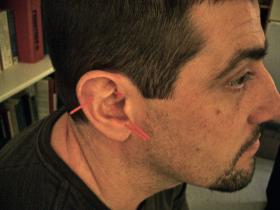 After sitting for about 45 minutes, the needles are removed from his ears. There’s actually no pain, says Bradley. “It’s really relaxing and kind of hard to explain.”

For centuries, Acupuncture has been used as a healing modality for everything from knee pain, to headaches to overall well-being. It’s emerging as a tool to help veterans with PTSD in both military and civilian settings.

“It’s a protocol that uses five needles in each ear, and it’s used to actually turn off the sympathetic nervous system, which is your fight or flight system. So, it releases neurotransmitters in the brain to tell the body to relax.” Each point in the ear, she says, corresponds to an organ, which in Chinese Medicine, has an emotional component. “So in using those points, it helps the mind, the body and spirit to relax and release and let go so you don’t have that sense of hyper-vigilance or fear, or sadness, or grief.”

In the year and a half since Moody and her colleague Judith Kenen started the walk-in clinic, they’ve provided acupuncture to some 250 or so soldiers, veterans and their families. “It’s really about us being able to give back to the veterans in our community and for them to have the opportunity to have the experience of having a moment where they can come and relax and feel safe.”

The donation-based clinic is part of the Military Stress Recovery Program, started by Acupuncturists Without Borders, based in New Mexico.  They started doing community acupuncture in Louisiana after hurricane Katrina and then expanded to work with Veterans and their families. There are many similar clinics around the contry.

How effective the treatment is, says Moody, depends on the individual.  “For the people I’ve been working with that come repeatedly, over time the treatments build upon each other and they become more powerful and they get more benefit.”

63 year-old Michael Goodman is one of those repeat clients. He’s a Vietnam Veteran and has been coming to the clinic weekly since last summer. “I think that it’s been a really calming influence and i can tell i’m much less stressed and more even and I’m able to go throughout the week with a more level head, a more stable, emotional outlook on life.”

This was only Robert Bradley’s second treatment, but he says he plans to keep coming back. “I didn’t notice anything in my sleep pattern, yet, but as far as the calming effect, I definitely felt that, as soon as i got out of the chair last time, and the same thing today.”

The Atlanta Veterans Acupuncture Clinic is open on Monday nights, on a walk-in, donation basis.