Those who have had too much to drink on Lake Lanier can now take advantage of a new type of business that acts as designated driver.

The company is called SAFENAV. For $125 those who have had one too many can call the company to meet their boat wherever they’re at in the water. SAFENAV employees will arrive on an inflatable dinghy and pilot the customers boats into a marina. They’re also available to drive boats by the hour.  Company owner Jeff Perfater says he started SAFENAV after several deaths on Lake Lanier last year. 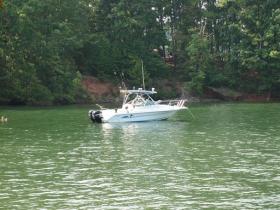 “This way your passengers stay safe, your boat remains safe and you don’t end up with a BUI which is costly and sort of embarrassing.”

The company opens as the state tightens the legal blood alcohol limit from .10 to .08. However, the Georgia department of natural resources says it’s not stepping up enforcement because of the new law. But DNR Deputy Commissioner Homer Bryson says boaters will see more officers on the Lake this year. He says it’s because the department previously had several vacant positions.

“And those vacant positions have been filled and they’re through the ranger academy so they’re available to be on the water this summer.”

Three years ago, Bryson says there were only nine officers available to patrol the lake. This year there are 12.