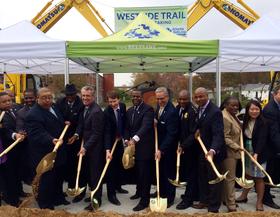 “Many people in the Southwest community never believed that we would make a $43 million investment in this part of town,” Reed says.

A federal grant will speed up construction on the new segment by two to three years. The trail will run from University Avenue in Adair Park up to Lena Avenue at Washington Park.

Angel Poventud attended the ceremony. He says he expects more developers and money to flow into his neighborhood.

“There’s still a lot of work. I mean you’ve got vacant houses. You’ve got burnt out houses. In some ways it feels like the beginning of a chapter,” Poventud says. “A little bittersweet in that we’re growing up and with that, that means more responsibilities, bigger responsibilities. And that’s good.”

Reed adds that he doesn’t expect a contract dispute with the Atlanta Public Schools to delay construction of the BeltLine.