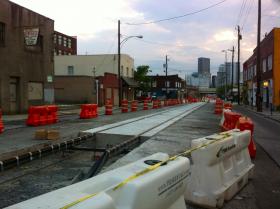 As earlier reported by WABE, the project has had major problems moving underground utility lines. It’s delayed the project at least six months.

Now there’s some indication about how much the delay will cost.

“[The total budget will be] under $100 million,” said Tom Weyandt, the mayor’s senior transportation advisor. “Probably $98 million and change.”

The project’s initial budget was around $69 million when approved in 2010. Since then, the price tag has increased to about $93 million. Weyandt is quick to note much of the budget increase is the result of conscious decisions by project leaders.

“The city chose to buy two additional cars beyond what had been originally proposed. The city also got additional grant funds for pedestrian enhancements,” said Weyandt.

But Weyandt acknowledges the project’s built-in contingency funds are close to depleted, in large part due to the utility relocation issues.

Project leaders are now looking to secure an additional $6 million or so through the Atlanta Regional Commission, Invest Atlanta, or a local tax allocation district.

Weyandt does not believe more city funds will be necessary.

“I see very low likelihood that we’re going to have to seek additional local funds of any sort to make this thing work.”

That said, the project is far from completed. It has laid down about a fifth of its 2.7 miles of track. It’s currently set for completion in the spring of 2014.

The Atlanta Streetcar is jointly funded by a large federal grant, the city of Atlanta, and the Atlanta Downtown Improvement District. It’s managed day-to-day by MARTA. MARTA contracts with URS Corp. to do the actual construction work.